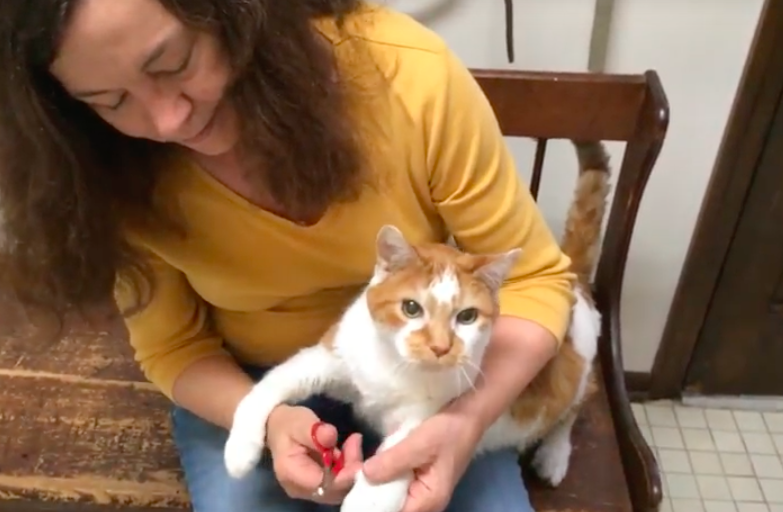 When people find out that I train cats, I often get one of two reactions: they either state that you can’t train cats or state that it’s silly to do so. As a rebuttal to both of these beliefs, I’m going to walk you through the steps in training a cat to allow his claws to be trimmed. This will show that cats can be trained. It will also show how this skill is helpful to a cat.

More people are keeping their cats inside for life than ever before, making claw trims a necessity. Even if you take your cat to the veterinarian for this procedure, the cat will suffer less if he has been trained to accept the preliminary steps. But it is much less stressful if the cat will happily let his owner trim his claws in his own territory – your home. As the below video shows, claw trimming can be a happy interaction.

The first step in training your cat to accept claw trims depends on your cat. If you can already touch your cat’s paws without getting a negative reaction you are starting out ahead of the game. Often this is the first step.

Say, for example, that your cat likes to be petted and that you can touch your cat’s leg without getting a reaction. Once a day pet your cat, and if he is content, then run your hand down his leg to his wrist. Softly say “good” and drop a morsel of food that you know he enjoys. Repeat once or twice if the cat is content. If he flinches at any point, remove your hand from his leg, wait for him to relax, and then repeat if he sticks around. But this time, stop your hand short of the spot that startled him. Do this daily in short sessions of a minute or less until you are touching his paw and getting no reaction.

Pressing the Claws Out

Once your cat is content with your holding his paw pad, gently press it and then say “good” and drop the morsel. Pay close attention to his body language so that you stop before he flinches or worse. Remember not to rush the process – haste makes waste was never truer than with cats! At each session incrementally increase the pressure on his paw pad until his claws are pushed out. Release the pad as soon as they are out and give him a morsel. Slowly increase the time that you are able to hold the paw firmly enough for the claws to be exposed.

Now you need to let him get familiar with the claw trimmers. First let him examine them on his own and say “good” and give him a morsel of food for remaining calm. Sniffing them is a good sign! Next work the trimmers with your fingers as if you are cutting the air. This will get the cat accustomed to the sound. Once that step goes smoothly cut some raw spaghetti with them, so he can hear the crunch sound. Reward him for staying calm.

Cutting with the Trimmers

Once your cat is fine hearing the trimmers cut while having his claws pressed out, it is time to trim the first claw. Only trim a little bit off of one the first time. If it goes well you can cut another one the next day. Say “good” and feed the cat after the claw trim. If he was startled go back to cutting the air near the claw for the next day or so. Do not rush the process. Do not cut more than one claw a day until the cat is very comfortable with the procedure.

In ten days you may have trimmed all of the front claws. Wait for them to grow in, and then repeat, only trimming one claw a day again. If things are going well after a few days of this second round of trims, you may trim two claws in one session before reinforcing the good behavior with the food. Do not feel that you must strive to do ten claws in one session – many cats do best if only one paw a day is attended to, and that is fine.

It’s best to wait to train the cat to accept hind claw trims until the cat is very comfortable having the front paws’ claws trimmed. Hind claws are thicker, and cats are often more uncomfortable with these claws being trimmed. Luckily, they don’t need to be trimmed nearly as often as the front ones, so don’t risk turning the cat against claw trims just to reach this next goal.

The Benefits of Training

There are many skills that make life easier for both an owner and her cat – going in a carrier on cue, coming when called, going to a place on cue, and following the owner when cued, to name a few. Training is also a source of mental and physical enrichment for cats. So, yes, you can train your cat and no, it isn’t silly to train them. Just remember to keep sessions short and don’t rush things.

If you would like to learn more about practical cat training, read my blog on teaching your cat to enter the carrier on cue.

Patience Fisher owns Patience for Cats LLC, a cat behavior business based in Pittsburgh, PA. She is Associate Certified by the International Association of Animal Behavior Consultants. She holds a Bachelor’s in Biology, a Diploma of Feline Behavior Science Technology, and is a certified veterinary assistant. Check out her humorous YouTube video at her Patience for Cats channel. Visit her on Facebook at Patience for Cats.